Microsoft's Well-Known Web Browser is Set to Retire in 2022 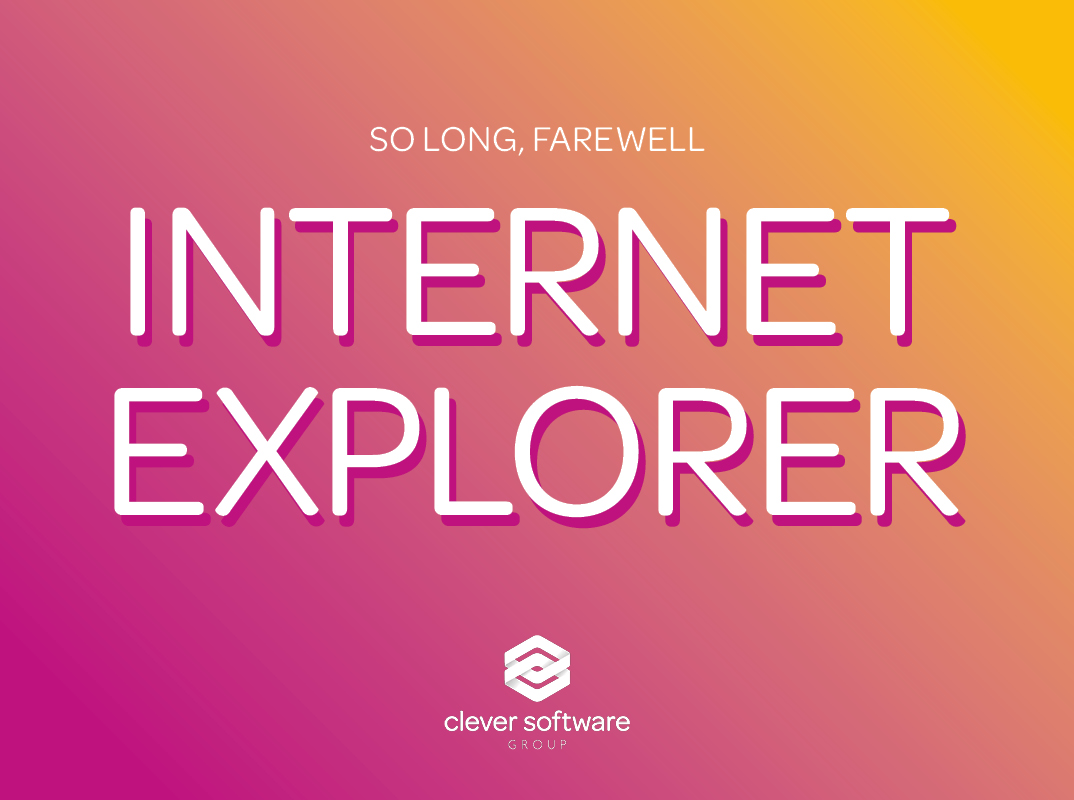 Thanks for Everything Internet Explorer

We have all been there. Trying to browse the internet in a rush and have accidently clicked Internet Explorer (IE), instead of one of the more superior web browsers. This leads us to question our life choices, as we wait for IE to load, knowing full well that we could’ve made a cup of time in that time.

Despite the love-hate relationship we all have with the archaic web browser, it is time to say a (long) overdue farewell, to what has become somewhat of an icon. Google Chrome is the search engine of choice in the Clever Software Group office, but we are of course all very familiar with Internet Explorer – After all, it could be considered a pioneering web browser.

Tech giant Microsoft has announced that after 26 years of arduous service, Internet Explorer is finally being pensioned off, in a years’ time. After June 2022, the web browser will no longer be accessible on consumer versions of Windows 10. Microsoft Edge, the tech company’s newer search engine, was released in 2015 and will act as IE’s full time replacement. Edge will feature an ‘Internet Explorer mode’, allowing certain aspects to still continue. This will allow the transition from one browser to another to be as smooth as possible.

It is a relatively unknown fact but Internet Explorer 3, which was launched in 1996, was the first web browser to introduce Java applets and implement CSS – something which we are very familiar with as a custom software development company. So in a sense, Internet Explorer was somewhat of a software trailblazer in its day.

The final days of Internet Explorer have been anticipated for a while now, with only 1% of consumers still actively using the browser, over other available search engines. The most recent version of IE, released what feels like a lifetime ago in 2013, will cease to support online Microsoft services, such as Office 365, Outlook and OneDrive. The outdated web browser has already stopped supporting the web app version of Microsoft Teams, which was put into action last year.

Microsoft has slowly, but surely, been trying to phase out the use of Internet Explorer, since the inception of more advanced web browser, Edge.

Sean Lyndersay, the programme manager of Microsoft Edge, has described Edge as being a “faster, more secure and more modern browsing experience”. Consumers that are still reliant on Internet Explorer at home have been advised to move away from its services, before its official retirement on June 15th 2022.  Google Chrome leads the internet browsing field, with over 64% of consumers choosing to use it over any other search engine. However, 3% of users still continue to press on with Microsoft Edge. The loyal following of Internet Explorer users will more than likely move to Edge, after IE is laid to rest.

Microsoft Edge’s ‘IE mode’ support feature is thought to be implemented until at least 2029. It is rumoured that a years notice will be given, if support for this feature is to be discontinued.

So, it is with a heavy heart that we prepare to say goodbye to a household name, in the field of software and technology – although, you have probably unpinned it from your desktop taskbar already.

Take a bow, Internet Explorer. You have served us well, despite being ever so slightly frustrating at times. Scheduled to be gone, but not forgotten.